Whoever has booked a ski holiday in the past, surely noticed: prices for a ski pass vary widely. That’s why the well-known holiday home expert Belvilla by OYO made the comparison. What turns out: the cheapest options for six days of skiing can be found in Slovenia and France and some of the most expensive options in Switzerland.

Belvilla by OYO compared as many as 160 ski areas, each hosting at least 40 kilometres of ski slopes. For a six-day ski pass, adults pay an average of 159 euros in Slovenia. In France, you pay in the ski areas on average 235,21 euro, in Germany 240,20 euro and in Austria 293,51 euro. In Italy, the average price rises to 296,50 euros. Switzerland is the most expensive destination with an average price of 342,17 euros. 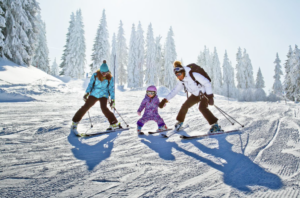 One of the cheapest ski areas
Of all the 160 ski areas Belvilla by OYO compared, France’s Alpe du Grand Serre is the cheapest. For 141 euros you can buy a six-day ski pass there, which gives you access to as many as 38 slopes. This allows experienced as well as novice skiers to go there. So you can explore various blue slopes up to 2,140 metres.

Slovenian Pohorje is also in the top three. For 159 euros, you can glide through the country’s largest ski area for six days. And that even after sunset, because Pohorje possesses one of the longest lit runs in Europe. Extra fun: from Pohorje you can drive to the capital Ljubljana in just two hours. If you spend another half hour in the car, you can reach the fairytale-like Lake Bled.

If you set your sights on Austria, you will pay the most in Ötztal: 390 euros for six days. Though you get great value for money. Ötztal spoils you with no less than six ski areas, two of which are located on a glacier. Modern cable lifts take you everywhere. In Sölden, for instance, they lift you to altitudes of up to 3,340 metres.

Combi pass
Those who like to hop from one ski area to another might make the most interesting purchase in Italy. There, a six-day ski pass for the Dolomiti Superski will cost you 373 euros. For that money, you get access to 12 outstanding ski areas – together accounting for 1,200 kilometres of runs and thus the world’s largest ski area. By the way, the slopes take you through the Dolomite mountains, which are a UNESCO World Heritage Site.

Ski passes for children
Are you making it a cosy family holiday? Then check the children’s rates, as they also vary widely and are sometimes difficult to compare. In most Austrian ski resorts, for instance, a children’s ski pass is compulsory from the age of six. While in Italy, your children often ski with you for free up to the age of eight.

On average, children’s ski passes are most expensive in France: 188,06 euros for six days. In Germany, you count around 109,40 euros for the same period. Although many families choose for the popular Austria. There, the most expensive six-day ticket costs 189,50 euros (in Serfaus-Fiss-Ladis) and the cheapest 105,50 euros (in Oberstdorf Kleinwalsertal).

Taking advantage online
Belvilla by OYO based all its research on the prices you pay locally at the box office. Do you book online in advance? Then you sometimes benefit greatly. Discounts run as high as 70 per cent. Especially in Austria and Switzerland, online ticket prices vary greatly. This is because the ski resorts there use a dynamic price calculation, which depends on the period in which you book, the current reservation figures and sometimes even the weather conditions.