Zürich,  1 September 2021 – Are you itching to strap on your skis again and head for the mountains? As everyone has been doing plenty of sport over the past lockdowns, that winter sports challenge can’t be too tough. For what we have in store for you now, you’d better have strong legs. We present you with ten long to very long ski runs, good for kilometres of sliding fun. And what’s more, in a Belvilla holiday home, chalet or flat near those slopes it’s great to regain your strength. Comfort, luxury, space and privacy within your own chosen bubble. Ready to go? Down you go.

At the foot of perhaps the most photographed mountain in the world – the Matterhorn – lies the car-free and mundane Zermatt. The location of Zermatt at the foot of the Matterhorn and in the middle of a skiing area makes it a particularly attractive holiday destination. The skiing area includes 54 cable cars and lifts and 360 kilometres of slopes. Especially good skiers and snowboarders will enjoy the often challenging slopes of Zermatt. Skiing on the glacier takes place all year round. The descent from Klein Matterhorn to Valtournenche offers 16 kilometres of pure winter sports fun.

With a start on the glacier of Dome de la Lauze at 3568 metres and an arrival in the village of Mont de Lans, you cover no less than 17 kilometres on this descent, good for an altitude difference of 2288 metres. You can relax after one of the longest descents in the world in the sauna, whirlpool or Hamam of Chalet Leslie Alps. This cosy chalet accommodates ten people, has five bedrooms and three bathrooms, and is located in the centre of Mont de Lans, barely a hundred metres from the ski lift. 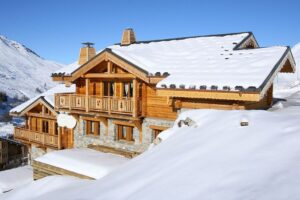 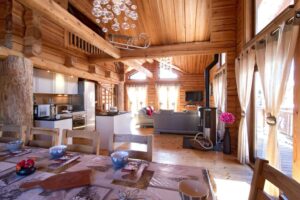 La Sarenne in Alpe d’Huez is a mythical descent, famous and infamous as a 16 km long black run. You start at 3,330 metres altitude on the Pic Blanc and end 1,800 metres and 16 kilometres lower in the Gorges de Sarenne. Afraid of black slopes? Don’t worry, except for a few steep parts at the beginning of La Sarenne, this piste is quite feasible for the average skier and snowboarder. Don’t forget to enjoy the breathtaking landscape along the way. If you are interested in this nice home in Les Chalets de l’Altiport you can quickly reach the centre of Alpe d’Huez where the DMC1 and 2 lifts and Pic Blanc take you to the roof of the area. Ideal to start your day with.

The skiing area Mürren-Schilthorn is not only the highest skiing area in the Bernese Oberland, it is also the location where a part of the James Bond film ‘On Her Majesty’s Secret Service’ was shot. In the revolving panorama restaurant Piz Gloria, you have an overwhelming view of Jungfrau, Eiger and Monch. And while you’re there, the piste from Schilthorn to Winteregg is good for just under sixteen kilometres of pure fun. From your chalet in Mehlbaum we can heartily recommend the train journey via Brig over Interlaken to Lauterbrunnen. The journey from Brig takes just one and a half hours but takes you through an enchanting winter wonderland.

Sölden is the place to be for the longest descent in Austria. The start is at the top of the Rettenbach glacier, where you must first enjoy the breathtaking view. You then descend via blue and red pistes to the valley station of the Gaislachkoglbahn in the centre of Sölden, which is 15 kilometres and 1970 metres altitude. The entire descent is not overly difficult, which makes it perfect for children too. And of course, you stop along the way for a plate of delicious Kaiserschmarrn.

The Swiss ski resort Obersaxen-Mundaun-Val Lumnezia might not ring a bell. It is a less known but beautiful ski area in Grisons, where the typical authentic Swiss atmosphere prevails. Most of the slopes are not overly difficult, so that beginners and children are well catered for. The Mundaun-Valata slope is, with its fifteen kilometres, a pretty long slope that takes you through a beautiful natural landscape. Mind you, the piste is quite flat in many places. This can be particularly annoying for snowboarders.

Barely fifteen minutes’ drive from beautiful Innsbruck is the small and friendly ski resort of Glungezer. With only a good twenty-five kilometres of slopes and six lifts, Glungezer is quiet and family-friendly. There are no queues at the lifts and in the authentic mountain huts you will be spoilt with delicious and simple local recipes. Fifteen kilometres of the total of twenty-five kilometres of pistes are occupied by one of the longest pistes in all of Tyrol. The descent from the top of the ski resort to Tulfes in the Inntal is an absolute must.

Saas-Fee is a name like clockwork within the Swiss winter sports regions. Until the 14th century, there was only one municipality in the Saas Valley: Saas. Of the villages that arose from this, Saas Fee, also called the Pearl of the Alps, is the most famous. The glacier village at 1,800 metres above sea level is surrounded by thirteen four-thousanders with the 4,545-metre high Dom as the highlight. On the Mittelalalin glacier at 3,600 metres, you can ski all year round. And it is precisely on this glacier that you can venture down a fourteen-kilometre descent back into the centre of Saas-Fee, covering 1,800 metres in altitude. The glacier world and the surrounding four-thousanders make for an incredible spectacle. From one of the chalets below, you can be in the Pearl of the Alps in an hour and a half,

Ideal for a day elsewhere to soak up the atmosphere. 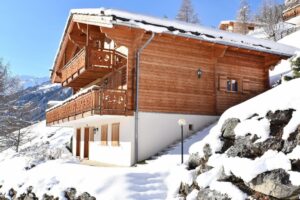 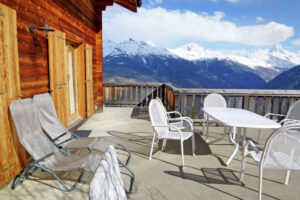 Flaine was built at the end of the sixties with the only purpose: winter sports. That is why many concrete buildings were erected in a beautiful natural environment. The car-free village – in a design by Marcel Breuer – had to be functional above all. The ski resort, on the other hand, quickly makes you forget the concrete buildings. Flaine is a very snow-assured destination that sometimes gets legendary amounts of snow. The piste ‘Les Cascade’ is a fourteen kilometre long blue run in the Grand Massif ski area. You start at 2,480 metres on Les Grandes Platières, from where you have perhaps the most beautiful view of Mont Blanc and the Aiguille du Midi, and you finish in Sixt at 760 metres. You can regain your strength in the sauna or indoor swimming pool of one of the beautiful flats in the four-star residences Belvilla has in store for you. 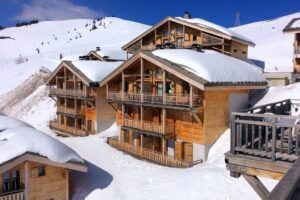 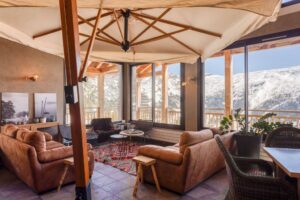 Sankt Anton am Arlberg is considered the cradle of alpine skiing. It was here that the world’s first ski school was founded in 1903. Sankt Anton is one of the best-known winter sports areas in Austria, and by linking up with the ski areas of Lech/Zürs and Warth/Schröcken, the Ski Arlberg region boasts more than three hundred kilometres of pistes. The Valluga (2,811 metres) is Sankt Anton’s local mountain and a household word in the region. And it’s on this mountain that the longest descent of the region starts. You can descend via the Ulmerhütte all the way to Sankt Anton, which is 12 kilometres long, mainly for advanced skiers. Then you can immerse yourself in the legendary après-ski. After this wonderful day, the ski bus will bring you to your flat on the edge of the forest where you can relax your tired legs in the sauna or steam room. 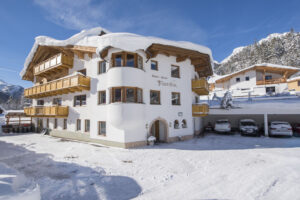 Belvilla is launching an Early Bird offer for the for Belgians popular wintersports destination Austria. For guests who book their next wintersports holiday in Austria and book this between upcoming 3 – 7 September, they may expect a nice discount. Click here for more information