Amsterdam, 5th August 2021 – With the ever-changing travel advice, many Dutch people are opting for a holiday home in their own country this summer. Those who want as little chance of precipitation as possible should go to a destination in North Holland in August. Those wanting the warmest possible holiday should go to Flevoland, North Brabant or Overijssel in August.

This is evident from Belvilla research, which scrutinised the climate in the various Dutch provinces using data from Klimaatinfo.

Sunshine
Sun worshippers prefer the provinces of Gelderland, Limburg, North Brabant, Overijssel, Utrecht and Zeeland. There the sun shines for an average of 7 hours a day in August. In the other provinces, the sun shines on average one hour less.

Precipitation
If you do not like precipitation, it is best to avoid Limburg: in August, the southernmost province of the country has an average of 20 days of precipitation. In North Holland it is 14 days. Drenthe, Overijssel and Groningen have the least rainfall on average in August: between 31 and 60 millimetres.

Average climate in August in the Dutch provinces 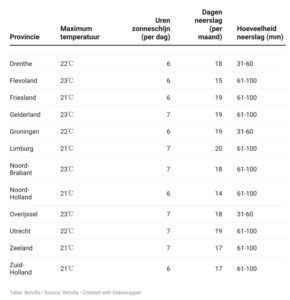